When Ken Quick ’08, ’24 entered John Jay’s Criminal Justice Ph.D. program in 2019, the NYPD was experiencing a rise in officer suicides. In response, the NYPD created a health and wellness program, prompting Quick to focus his research on alternative mental health resources–and that led him to puppies.

“One of the many things I learned was that you can’t attribute suicide to any one factor because it’s multifaceted,” Quick explains. “Being involved with police work affects one’s relationship with suicide in two ways. The first is access to firearms and the second is the stress of the job. It can be a recipe for disaster.”

“Officers who interacted with the dogs reported that they would be more willing to come to the department if they were undergoing personal problems and needed mental health support.”
—Ken Quick ’08, ’24

Searching for solutions, Quick met Gloria Gilbert Stoga, the President and Founder of Puppies Behind Bars, which teaches residents of correctional facilities how to raise service dogs. The puppies start at about eight weeks old and are assigned to an incarcerated individual who trains them.

When Gilbert Stoga attended an NYPD conference on mental health, K9 Chase Officer Heather McClelland asked if the department could have a dog. “The idea became a reality,” says Quick. “Now the program is in several police departments.” 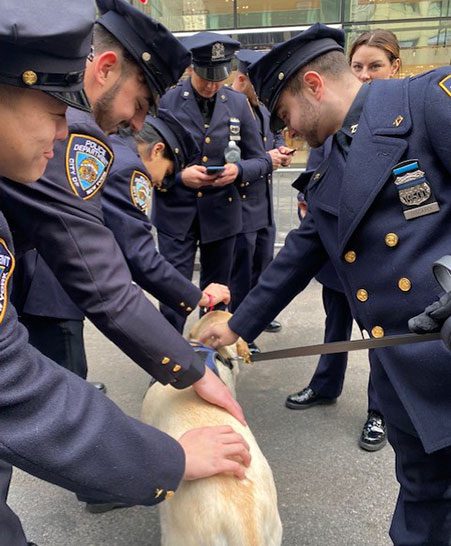 Quick, working with Associate Professor Eric Piza, Ph.D., surveyed Connecticut police departments to assess stress levels and interactions with the dogs. “Officers who interacted with the dogs reported that they would be more willing to come to the department if they were undergoing personal problems and needed mental health support,” says Quick.

“Now, I’m working with the NYPD to set up a more rigorous, randomized study comparing officers exposed to the dogs with officers who are not,” Quick says, hoping that the dogs spark interaction, engagement, and willingness to seek help.